Tipping is a customary practice of showing appreciation for the good service given by a worker. Tipping is usually a kind gesture. In some countries, this practice may not be considered good, but Nepal appreciates this custom with open arms.

Usually, trekkers tip small amounts of money in addition to the total payment for their services. The amount that a customer tips, depends upon himself. You can tip as high or as low as you might want to for the service you received.

In high altitude regions, tourism is the only option to earn money. And so this extra money will help these workers sustain their livelihood.

Workers are also motivated to provide better services when they receive tips.

Isn’t that a win-win for everyone?

But if you’re confused about how to tip while you’re in Nepal, this post will clear all your confusion. This guide contains all the information you’ll need about Tipping guides in Nepal. 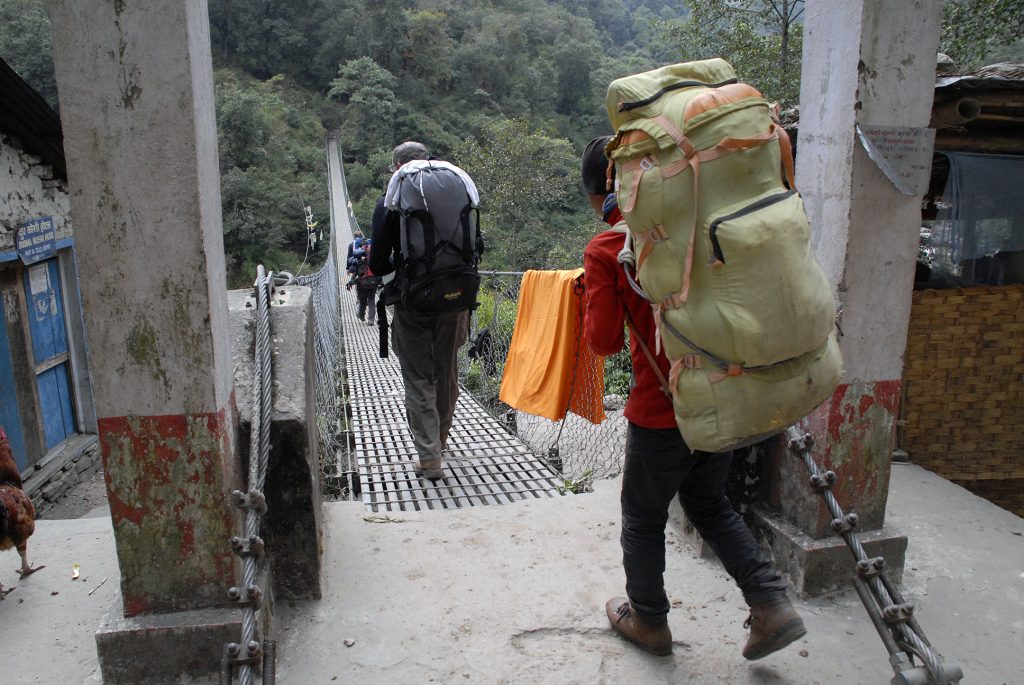 Tourists often hire a guide to help navigate routes in new places that they’ll be traveling to. Guides are always alerted in case of any danger or crisis to keep you far from trouble.

These guides often put their lives at risk for their clients. For instance, in high altitude treks and expeditions where there are very high risks, these guides will first scout the routes before sending you towards any formidable approach.

In Nepal, people usually employ a porter while trekking or expeditions. In most cases, the guide manages the number of porters as per the necessities. These porters carry your luggage and other loads for you.

For all these services, don’t you think these guides and porters are worth tipping some extra money for their services?

Now if you’re confused about how much to tip, here’s a table on how much people usually tip guides and porters.

Note that these are just guidelines and therefore, you do not need to tip the exact amount written in this guide compulsorily.

Tipping for Other Services in Nepal 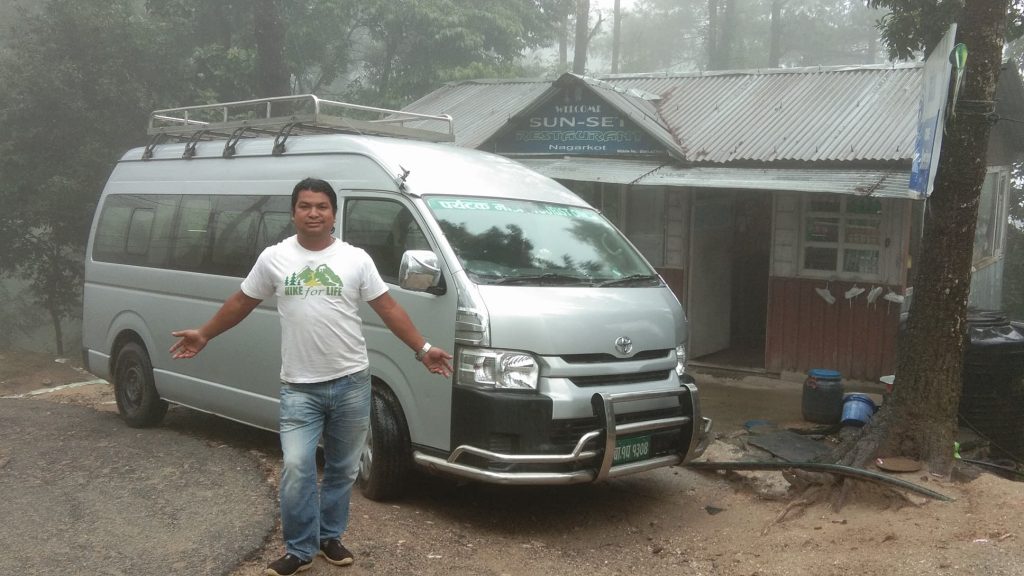 When one visits Nepal, guides and porters are not the only services one will use. Various services like hotels and hostels, restaurants, and taxi drivers also appreciate tip.

Unlike the developed countries, the average income of a Nepali worker is pretty low.  Especially people in these types of professions has considerably low wages. Even though these workers give their best services for the customer’s satisfaction.

That is why tipping even a small amount for their great services is accepted positively.

Note: Some workers in these professions does not typically expect a tip. This could be because of the Nepali cultures. So if you tip them, they might stuff the money right into their pockets without even counting. Workers do this often because they do not want to come as greedy.

When Tipping at Hotels and Hostels

Hotels and hostels have varying degrees of services that you may utilize. While tipping is not compulsory for all the workers that provide services to you, it is a gesture for the appreciation of their hard work.

Depending upon the standard of the room, you may leave a small tip for the cleaning staff in the hotels or hostels.

As for luxury hotels, it is better to tip a little more than this.

Workers in the room service profession work even harder and provide services up to your hotel room doorsteps. It is a good idea to tip these workers when they bring you the bill.

In a fancy hotel, people usually tip 10 percent. But do check the bill properly before tipping, because in some hotels the bill may already include the tip. In this case, you can skip the tip.

Bellboys are workers who usually carry your luggage to or from hotels and hostels. They also perform other services when asked for.

Depending upon the weight and size of your luggage, you can tip them from NPR 50 to 100. Consider giving more if in case you happen to have many bags.

When Tipping at Restaurants in Nepal

In Nepal, almost all restaurants will include a 13 percent tax and 10 percent service charge in the bill itself. So you should check the bill before deciding to tip in restaurants.

In case there aren’t these charges mentioned, you can tip. The typical amount is around 10 percent of the total bill.

In the case of small restaurants in Nepal, there aren’t tipping customs. So you can leave the change as the tip.

When Tipping a Taxi Driver in Nepal

In recent years, most of the taxis in Nepal have meter systems built to calculate the cost of a ride. This calculates the distance of your ride and the total cost of that ride. This way, the taxi drivers only charge the standard rate.

So, if you are satisfied or happy by the driver’s services, you can round off the fare as a tip. Either that or you could add an additional amount of around NPR 50 to 100 as a tip for their services.

When Tipping a Private Driver in Nepal

If in case you hire a private vehicle that comes with a private driver, you can tip as per the length of your trip. In most cases of multi-day trips and tours, you can pay for their food and drinks as a tip for their services. If you want to tip them separately, you can tip around NPR 1000 per day.

In Nepal, there are a few things that you need to pay attention while tipping someone.

Tip discreetly. While tipping in Nepal, you should not make a big scene.

Keep the money in an envelope and hand it directly to the worker. While giving a tip, softly mention that it is a tip for their service.

In case you don’t have an envelope, just hand the tip on the worker’s hand while handshaking. Also, don’t forget to mention softly that it’s a tip that you’re giving.

What currency to use while tipping in Nepal?

In urban areas, you can use either Nepali Rupees or US Dollars. There are money exchange locations, and therefore, workers will be happy with any currency that you tip with.

However, in rural areas, money exchange locations might not be available or too far to reach. In these cases, it’s better to use Nepali Rupees while Tipping.

How to hand the money while tipping in Nepal?

When handing money to anyone in Nepal, it is better to use your right hand. Though it is not that big of a deal for a foreigner, in Nepali people consider handing money or anything with the left hand as rude.

Many foreigners may not know this custom, and therefore, people won’t say anything. But the receivers will be happier and feel respected if you hand the tip with your right hand.

What else except money can I give while tipping in Nepal?

When traveling and touring, you might end up buying clothes or equipment that you don’t want to take back with you. For example, gloves, trekking poles, or extra clothing. In such cases, you can offer these to the guides or porters at the end of the trip.

Most of their work demands these types of equipment all the time. So they will be happy to accept these as bonuses with the tip that you provide.

Things to Avoid While Tipping in Nepal

Tipping is a good gesture in Nepal. It is a sign of appreciation for the good services provided by the workers.

Please remember, tipping is not customary in all parts of Nepal. In some places, tipping could lead to embarrassments as well. In situations like these, tip discreetly without showboating it to everyone around.

Finally, tip people in Nepali Currency rather than other currencies. This will be more convenient for the workers.

How much should I tip a guide while trekking or touring in Nepal?

How much should I tip a porter while trekking or touring in Nepal? 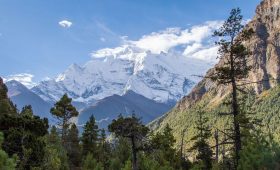 Annapurna vs Everest Base Camp Trek 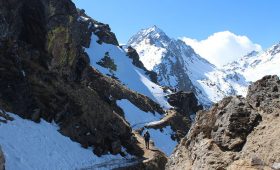 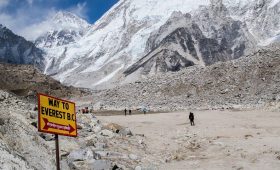